Global equity markets continued higher this past month on a mix of vaccine optimism and better than  expected earnings. The S&P 500 and the MSCI All-Cap World Index (a measure of all equity markets globally)  set record highs in August despite weakening economic data, stymied stimulus negotiations in the US, and a  renewed outbreak of the virus in Europe and Southeast Asia.

According to data provider FactSet, S&P 500 companies have reported earnings that are 22.4% above analyst  estimates. 72% of S&P 500 companies beat earnings expectations. This is the highest percentage of firms  beating this metric since the dataset was initiated in 2008. Overall, S&P 500 earnings are down 38% from the  second quarter of 2019. Combining these data points makes clear that analyst estimates were quite modest.  Only the Utility (8.9%), Healthcare (7.1%) and Tech (0.1%) sectors reported year-over-year earnings gains. The  Energy sector has been the worst hit, posting a 163% earnings decline over the same period. 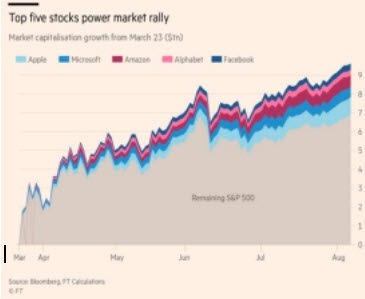 Large technology firms continue to drive the domestic market higher. The chart to the right shows that 25% of the returns of the S&P 500 since the March 23rdlow have come from just five firms. In fact, if just the top three performing stocks (Apple, Amazon and Microsoft) were removed from the S&P 500, the index would be down roughly 4% for the year.

This level of concentration continues a trend that has been building for several years. The size of the Technology sector has exceeded the combined valuations for the Energy, Materials, Industrials and Financials sectors by 25%. That has never happened before, even during the tech bubble of the late 1990s. The

average stock in the S&P 500 (not adjusting for market-cap) remains 6% below its mid-February high. At this  point in the recovery, firms not catering to aspects of the “home-body” economy are only marginally out of  correction territory despite the largest fiscal and monetary stimulus effort ever provided to capital markets.

Record high equity prices combined with a 38% decline in earnings, has created the most expensive market  since September 2000, as measured by forward price to earnings (P/E). Forward P/E is the ratio of current

stock prices to the earnings that analysts expect firms to realize over the next twelve months. The current  forward P/E ratio on the S&P 500 is 26x. The long-term average forward P/E for the S&P 500 is 15x, though the  figure varies depending on the length and timeframe of the study. Another method of valuing the equity  market is the CAPE ratio (Cyclically Adjusted P/E Ratio). This method looks at earnings over a ten-year period,  to reduce the impact of dramatic but relatively short-term events such as recessions and (hopefully) global  pandemics. The CAPE is currently reading 30.6x and has only been higher in December 1999 and in 1929.

These two metrics are in the top 98% of historical valuations. This is a cause for concern, particularly given  that S&P 500 earnings are concentrated in a small handful of technology stocks. In other words, if these  market leaders stumble, an outsized correction could occur.

There are two things to understand about expensive markets: 1) Forward P/E is a poor market timing device,  2) Normalization does not require falling stock prices.

On the second point, forward P/E normalization is realized one of two ways. The first is obvious; stock prices  fall back. The second way is that corporate earnings accelerate, bringing the P/E into line. COVID-19 is a  unique event, making historical comparisons impossible and earnings forecasting nearly so. Still, if market  sectors other than Utilities, Healthcare and Technology can start to rebound and gain earnings momentum,  overall market valuations can normalize without a correction.

2020 has been a year of extremes. March saw the fastest 30% decline in the S&P 500 ever, only to give way to  the best performing 50-day period in market history. We have now moved into a period of relative calm that  allows for a review of our recent investment decisions.

The high valuation and market concentration of today is similar to three years ago. Our thesis then was that  domestic markets were expensive relative to foreign markets. So we trimmed a portion of our U.S. equity  allocation to add exposure to Asian and European investments across asset classes. Since August of 2017,  PIM’s updated moderate allocation portfolio has outperformed the old by 50% with 15% less volatility. As of  this writing, all three non-U.S. equity investments in PIM clients’ Schwab portfolios are outperforming the S&P  500 year-to-date. This includes foreign large-cap blend, foreign developed country small-cap and emerging  markets.

We believe that market leadership will decentralize over time. When this happens, portfolios too heavily  exposed to a concentrated group of stocks and/or sectors will suffer. Because timing this change in market  leadership is impossible, diversification for risk management purposes is at a premium.

In summary and most simply stated

1) U.S. equity markets are expensive. We are not, at this time, reducing equity exposure because  stretched valuations may be sustainable, and reversion to the mean may come about via increased  corporate earnings.

2) Foreign markets look more attractive than domestic. Our current allocation models reflect this bias,  has for some time, and has outperformed the prior allocation.

3) We are not hesitant, as we have demonstrated throughout this year, to make portfolio allocation and/  or investment changes. As of now, we see no compelling reasons to do so. However, this may change  at any time. Our absolute duty of loyalty is to you, our clients. If we believe a change in investment  strategy is in your best interest, we will certainly proceed as appropriate.

We now enter into yet another period of transition. A return to school, virtually or otherwise, a change of  seasons, and a fairly consequential election will mark the time until we pause in November to give thanks.

Along the way, PIM will provide our normal quarterly communication as well as monthly letters like this one.  We sincerely hope that you find value in the content and guidance. If there is anything more that we can do,  please let us know.

Have a happy and peaceful September.