In our last newsletter, we discussed the impact of increasing interest rates and quantitative tightening on the U.S. bond market.  Below, we discuss why the Fed believes that raising interest rates will bring inflation down to its target run rate of approximately 2%.  Before addressing this issue, it makes sense to discuss inflation generally.

Inflation:  Why it Matters

Having gone 40 years with no inflation worries, to be ambivalent about it now would be understandable.  For higher net worth individuals, those who may not even notice the difference in the prices of milk and eggs from six months ago, those with no need of a mortgage or consumer loan, this may seem much ado about nothing.  But it’s not.

In the late 1960s and early 1970s the Fed was soft on inflation, attempting instead to maintain the health of the labor and capital markets.  Perversely, this policy position caused businesses to both fire employees and increase prices, resulting in stagflation and four recessions over the ‘70s and early ‘80s.  The S&P 500 returned zero from January of 1973 until July of 1980 – seven consecutive years of zero returns as the markets struggled with high and volatile inflation rates.  This scenario is what the Fed is working so hard to avoid now.

Fed Chairman Powell has stated repeatedly that he doesn’t want the American people to become complacent about inflation, that complacency is a dangerous thing.  He is right.  Persistent inflation erodes the value of the dollar and causes chaos with capital markets and the labor market.  Complacency with inflation prolongs it.

Actually, the remedy is that consumers need to slow down spending for a while.  This is something we are loath to do and therefore, must be encouraged (or perhaps bludgeoned into submission).  But slow down we must.  When consumers slow spending, businesses must lower prices – either to clear out inventory or to attract customers – eventually lowering inflation back to acceptable levels.  The connection we wish to establish is that higher interest rates lead to reduced spending in several interconnected ways:

In summary:  rates are up, home values are down, corporate profits are down, stock prices are down, bond prices are down, layoffs have begun.  When taken together, consumers should be spending less, where they can.  And yet, as of the most recent report, inflation has barely moved and remains elevated.  Why?  Generally, because spending has not slowed by the required magnitude.  But there is something about how inflation is calculated that is contributing to persistent, elevated inflation readings.

Inflation measures are designed to quantify the cost of living.  Putting a roof over your head is generally the largest single expense for most people.  Accordingly, shelter accounts for 30% of the consumer price index (CPI) and 40% of core inflation.  For the past seventy years, the inflation rate of shelter has consistently been above the overall rate of inflation.  But the degree and duration to which shelter is adding to inflation post pandemic has never been experienced before (using data back to 1947).  Due to its high weighting in the inflation statistics, shelter costs need to flatline for the Fed to have any chance of hitting their 2% inflation target in the near term.

The Bureau of Labor Statistics (BLS), the government agency in charge of gathering the data, measures shelter costs two ways: 1) rent, and 2) owner-equivalent rent.  Rent is self-explanatory, it includes new and renewing leases.  Owner-equivalent rent (OER) is a survey-based measure.  The BLS asks homeowners: "If someone were to rent your home today, how much do you think it would rent for monthly, unfurnished and without utilities?"  Due to the methodology of the BLS, these shelter figures tend to lag real world data by at least nine months, though some economists have suggested the lag is closer to a year or longer. 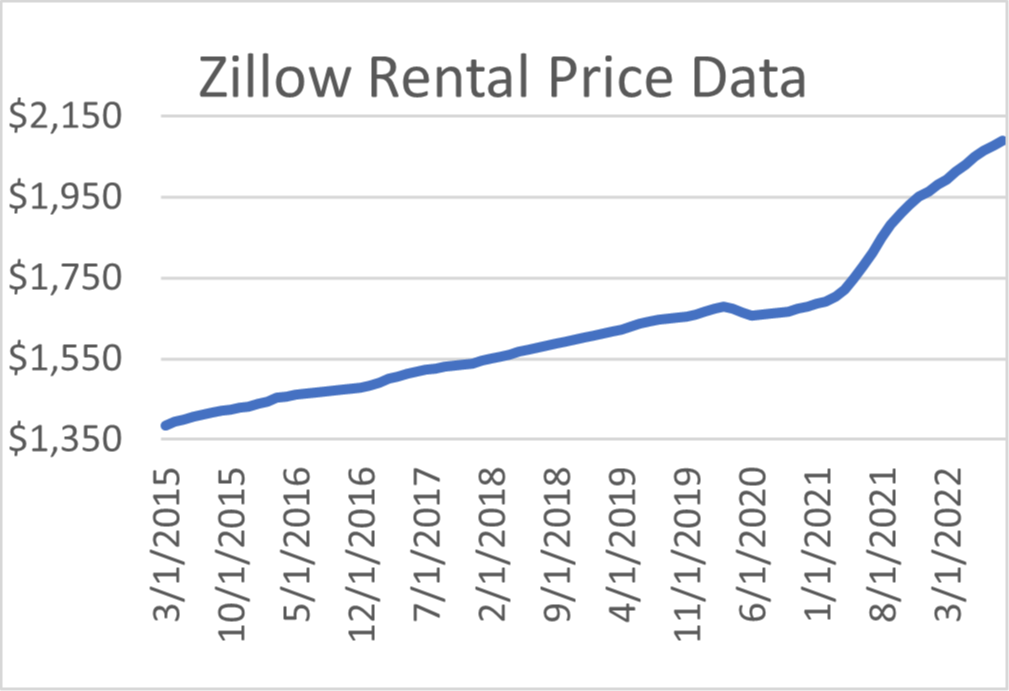 Rental price inflation for both multi and single-family units has been massive.  Private market data suggests that overall rental price growth (new and renewing leases) will be 11.5% in 2022.

This surge in rental prices is bringing a massive supply of units to market as landlords seek to cash in. There are more multi-family apartment units in the construction pipeline today than at any time since 1974.  While the extra supply of rental units will put a lid on prices over time, analysts still expect rents to increase another 4% in 2023 before moderating to 2% in 2024.  Rental prices will likely pull overall inflation numbers higher into the first quarter of next year.  Analysts have been revising this inflection point higher and further out for all of 2022.

Thirty-five percent of the TIAA Real Estate Fund is invested in multi-family housing.  This has propelled the fund to double-digit gains this year, but also suggests lower rates of growth in the near term. 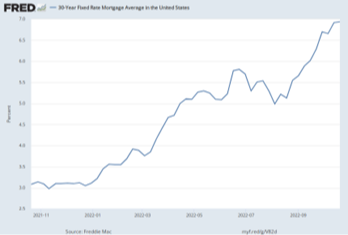 In August of 2021 we wrote that rising home values and mortgage costs would impact affordability and slow price appreciation to the mid-single digits. Since that time the Case-Shiller National Home Price index has increased by 14.6%. Swing and a miss.We were certainly early in our call on home values, and by extension OER.  Our assumption about higher borrowing costs was spot-on.  Here’s a chart showing the average interest rate for a 30-year mortgage. The rate has gone from 3% to 7% in one year.  This increase is a direct result of the Fed’s actions to bring down inflation.  On a $500,000 mortgage, the difference between a 3% and a 7% mortgage is $1,233 more per month, which is 20% of the median household income.

The rapid increase in the cost of a mortgage, combined with record high home prices has resulted in 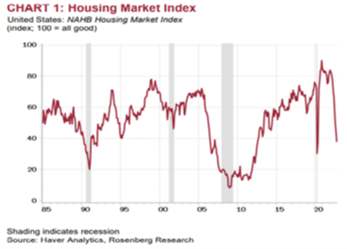 the steepest decline in home sales in ten years (outside of COVID-impacted 2020.)  As mortgage rates have moved up, people have stopped moving.  Existing home sales (volume, not prices) are down 24% in the past year.

Another tool for gauging the outlook for housing is the NAHB Housing Market Index, a survey of single-family home builders which is closely watched by Wall Street.  The index is based on 100 being the best possible conditions.  The most recent reading was 38, which ties the April ’20 reading.  Both home builders and home buyers have become very pessimistic about the housing market.

Buyers simply cannot afford to make a purchase under these conditions.  Most analysts are calling for a 10% decline in home values over the next few years.  If true, that would bring the Case-Shiller Home Price Index back to where it was in November of 2021 and close to our forecast from last August.  But there are competing dynamics.  A majority of homeowners have fixed rate mortgages below 4%.  Most people will elect to stay in their current home rather than move into a new home with a 7% mortgage.  This should limit the supply of homes on the market and prevent a significant fall in home values.

The housing market is the area of the economy that is most sensitive to the Fed’s plan to slow inflation. Remember, the Fed needs to encourage people to spend less and save more.  By increasing the cost of borrowing the Fed has dramatically slowed the housing market.  Housing and all related industries, from mortgage brokers to real estate agents, home improvement firms, home builders and their suppliers represent approximately 20% of the US economy.  By slowing the housing market, the Fed is slowing the economy and causing consumers to reassess their spending habits.

Slowing the housing market will slow inflation readings directly (rent/OER) and indirectly through falling consumer spending.  However, OER and rental prices are lagging indicators.  Current inflation readings reflect shelter cost dynamics from several quarters ago.  We don’t expect to see today’s weakness reflected in the data until the end of the first quarter of 2023, or later.

The Fed is intent on breaking inflation.  The primary policy measure to achieve this goal is raising interest rates.  Higher borrowing costs should lead to lower rates of spending and higher rates of savings, and eventually will.

A significant component of both primary inflation measures is the cost of shelter.  There is no doubt that increased borrowing rates are having the desired effect on the housing market.  Unfortunately, we may not see this reflected in inflation readings for a few more months.